The Lodge celebrated its Centenary in 2014.

The initial, or consecration, meeting of Unity and Progress Lodge was held on 27th April 1914 at Anderton’s Hotel in Fleet Street, the first normal meeting followed on the 23rd May 1914.

Anderton’s Hotel now no longer exists, it was demolished as part of a redevelopment of the Fleet Street area in the late 1930s. The Unity and Progress Lodge now meets at Freemasons’ Hall in Great Queen Street. 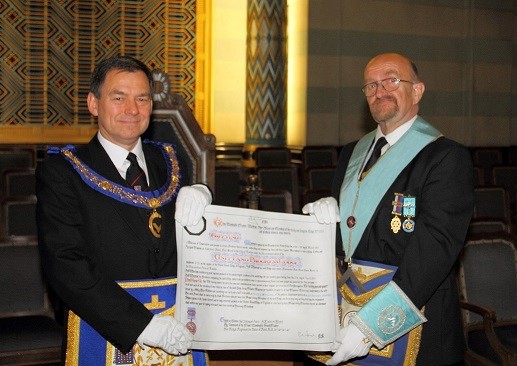 V.W.Bro. Philip Summers and W. Bro. Russell Berry, the Master in Lodge’s Centenary year, with the Warrant presented to Unity and Lodge at the Centenary Meeting.
Sixty nine people attended the consecration meeting in 1914, fifty one attended the anniversary meeting in 2014.

All attending received a booklet describing the history of the Lodge, a short presentation of this history was given by W. Bro. Jim Hughes. A centenary warrant was presented to the Lodge.

For several years after its inception the Lodge held annual ‘Ladies Festivals’ which simply followed a normal Lodge meeting instead of the usual masonic ‘Festive Board’. This tradition was continued at the Centenary with a “White Table” banquet and Ladies Festival after the formal Lodge meeting, this Centenary celebration was held in the Edinburgh Room at the Connaught Rooms 143 people attended.

GUIDANCE FOR LODGES AND CHAPTERS

Read more
Read More
We use cookies to ensure that we give you the best experience on our website. If you continue to use this site we will assume that you are happy with it.OkRead more